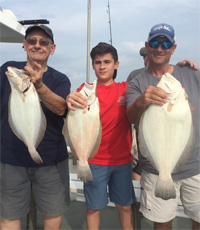 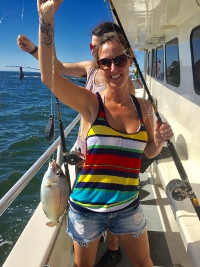 The fluke fishing has finally picked up a bit with the past few trips giving anglers action on the shorts and sea robins and landing several nice keeper fluke in the mix. It is good family fun and an enjoyable way to spend time together, so pack your cooler and come on down to the boat. The waters are calm and most days it is cooler on the water than on land.

CREDIT CARDS ACCEPTED ON THE BOAT  NO ADVANCE RESERVATIONS NEEDED

Not much to say about the fluke fishing other than it has been a slower than expected start to the season. We are fishing the Bays and the Ocean and there just doesn't seem to be much out there. Good days are when we have some action on the shorts and manage to boat a few keepers,, yet many days it has been a desert with 1 or 2 keepers for the boat. The weather has been unsettled, to say the least, and hopefully with a warming trend, the fluke will begin to bite. We try our best every trip and our goal is to give the anglers aboard the best time possible.

The Fluke season was off to a slow start, so it can only get better from here on in. We sailed Friday morning with a light crowd and less than ideal conditions, making for a tough day of fishing. We decided to shut down on the afternoon trip and try again Sat. morning. We were out on both trips today and could only boat a couple of keepers with not much action on the shorts.

CREDIT CARDS ACCEPTED ON THE BOAT    NO ADVANCE RESERVATION NEEDED

The fluke fishing has not improved much since the slow start to the season. We had a couple good trips with anglers boating nice sized fluke and having action on the shorts, but these trips were few and far between. One of those epic trips, sailing with a "light crowd",  not only did we get many quality fluke and short action, but we ran into a bunch of giant striped bass busting on the surface. Anglers had a blast, using topwater plugs, swim shads and bucktails, easily catching our boat limit and releasing many of the larger fish, including Matt's 40 pounder. Fluking slowed down a bit for a few days and lack of angler participation due to afternoon storm warnings kept us at the dock for the afternoon trips for several days. We had a couple of decent to good trips again with ome nice keeper fluke and a bit of action on the shorts before it slowed down again.  Since the season began, we have explored several spots not only in our Bay, but in the Ocean as well, and will keep looking. Yesterday's morning trip, with a "super light crowd" saw a bit of improvement with a better catch of nice keepers. On the afternoon trip, we had a change of plans, decided to net some bunkers looking for stripers, but instead had some action with the blues.  Jake and I are at the dock every day ready to embark on our daily fishing adventure, the next few days weather looks great, so we hope you will join us on our adventure.

CREDIT CARDS ACCEPTED ON THE BOAT    NO ADVANCE PURCHASE NEEDED.

Mon-Sailed out with a light crowd and had a slow morning, with most spots from the day before lifeless.  Anchored late in the trip and saw action on shorts, missed fish, broken lines and some quality keepers for a boat limit.     Tues-Another day with only a few anglers, used fresh bunkers, missed a bunch of bass, but ended day with some quality fish.    Wed-Fishing with fresh bunkers again today as they seem to appeal to the bigger fish. It was never fast and furious today, but we did end up with our boat limit again and chose to release some including a 30 pound beauty. The bass fishing has been good the past several days and it doesn't last forever, so grab your gear and come down and get in on the action

You are here: Home